With summer well underway, we’ve brought together a reading list to help you choose your holiday reading.

With non-fiction a great way to understand the impact of neurological disabilities and traumatic injuries on individuals, these highly-rated personal memoirs and riveting original investigations are a great way into better appreciating some very complex and important themes.

Driving Forwards: A journey of resilience and empowerment after life-changing injury

Sophie Morgan is a British television presenter and disability advocate. Voted as one of the most influential disabled people in the UK, Sophie’s powerful memoir details life-changing injury, her recovery, and her life since.

‘A book that’ll change your perspective on life. You’ll not be able to put it down.’ Fearne Cotton

From the creator of the award-winning podcast A Beautiful Brain, this timely and fascinating investigation of brain injury and sport explores the truth about concussion in sport and beyond it.

‘A MUST-read book for anybody involved in sports, the facts and truth needs to be common knowledge for everyone.’ – Alix Popham

Unforgettable: Rugby, dementia and the fight of my life

‘I’m in my early forties. There are days when I don’t remember the names of my wife and four kids . . .’

Rugby legend Steve Thompson MBE’s powerful and heart-breaking story of early onset dementia and serious progressive brain damage is told with contributions from his world-cup winning teammates and his former manager Sir Clive Woodward. Steve Thompson now campaigns to improve the game and safeguard those who play it.

‘So powerful. This book might just change the way you think about sport forever’ – Sir Clive Woodward 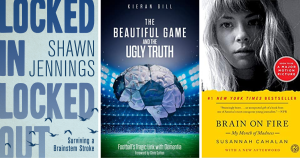 Locked In Locked Out: Surviving a Brainstem Stroke

After Dr. Shawn Jennings, a busy family physician, suffered a brainstem stroke he woke from a coma locked inside his body, aware and alert but unable to communicate or move. Once he regained limited movement in his left arm, he began typing his story, using one hand and a lot of patience.

The Beautiful Game and the Ugly Truth: Football’s Tragic Link with Dementia

An emotive examination of the world’s most popular sport and its ties to a devastating disease. In 2002, a coroner ruled Jeff Astle’s death at the age of 59 was the result of heading footballs. Modern professional players are fearing for their futures, too, as experts explain why it is wrong to lay the blame on those old heavy leather footballs.

Brain on Fire: My Month of Madness

The New York Times best-selling autobiography by New York Post writer Susannah Cahalan, Brain on Fire explores her struggle with encephalitis, which doctors originally misdiagnosed. It was made into a film starring Chloë Grace Moretz and released on Netflix in 2018.

“The bizarre and confounding illness that beset the 24-year-old New York Post reporter in early 2009 so ravaged her mentally and physically that she became unrecognizable to coworkers, family, friends, and–most devastatingly–herself… She dedicates this miracle of a book to ‘those without a diagnosis’… [An] unforgettable memoir.”– “Elle”